During the 2018 edition of Anime NYC, we were tasked by Bandai Namco for a variety of needs — booth buildout, staffing, giveaways, the creation of a duel station where guests could play a mobile game against each other, and of course our favorite marketing tool, two photo booths. In the 50×50 footprint, one side was dedicated to promoting games for Tokyo Ghoul and Grancrest, and the other side was dedicated to One Piece Treasure Cruise, which just so happens to be what this blog post is about as well.

A worldwide sensation, One Piece is one of the most popular anime’s of all time, so it’s no surprise that over the past 4 years the mobile game has had over 100 million downloads as well. However the US market is still relatively new when it comes to mobile games, at least compared to Japan and South Korea, so promoting titles and encouraging community has been at the forefront of BNEA’s gameplan. Anime NYC is one of the largest anime-centric events in the US, so it’s the perfect market to showcase and promote a game within that world. 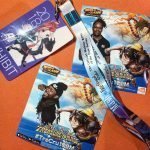 With a social reach of over 131,000 during the course of the three day event, the green screen photo booth was a great addition to the marketing plan, exposing US-based One Piece fans to the wildly popular game and encouraging new downloads and players.

Another aspect of the photo booth that made it a bit more unique was the fact that not only were the photos available to share digitally and post online, but they were also printed out in a square format that matched the digital format, which helped to make the takeaway even more memorable.

Want to bring a similar experience to your next event? Don’t hesitate to get in touch.