One of the assumptions when doing an event with green screen is that the entire scene is swapped out for a digital background. Take a photo of a guest, slap an image of the Great Wall of China or something behind them, overlay some logos and graphic elements — and there you go, a perfectly fine output at a green screen event. To be frank, that’s what do at the majority of our green screen events, and it’s a tried, true, and familiar solution. 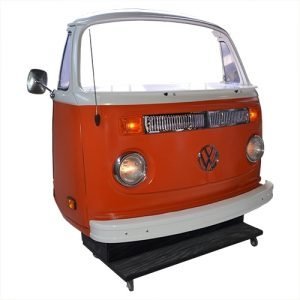 However, every once in a blue moon, we get to work with a real world prop or set piece that guests can physically interact with, and then bring in the technology of green screen to tie everything together to create a unique finished product. Take, for an example, an event we did where the client wanted guests to pose with, in, and around a prop that looks like the front of a VW bus. Easy enough, however they also wanted to utilize green screen to give guests options of where that VW bus was driving, which brought us into the territory we like to call green screen mixed media.

We wanted to create the most realistic final product possible, utilizing this VW bus facade that’s typically used as a bar at events. To do that, we not only found background scenes that matched the perspective that we were shooting at, but we also gave the VW bus actual depth by adding in windows along the side and back that weren’t actually there. As a result, by mixing real world and digital elements, you get a final output that adds a sense of realism and at first glance you’re not sure what’s real and what has been faked.

To learn more about how we can bring a green screen mixed media solution to your next event, get in touch on our contact page.